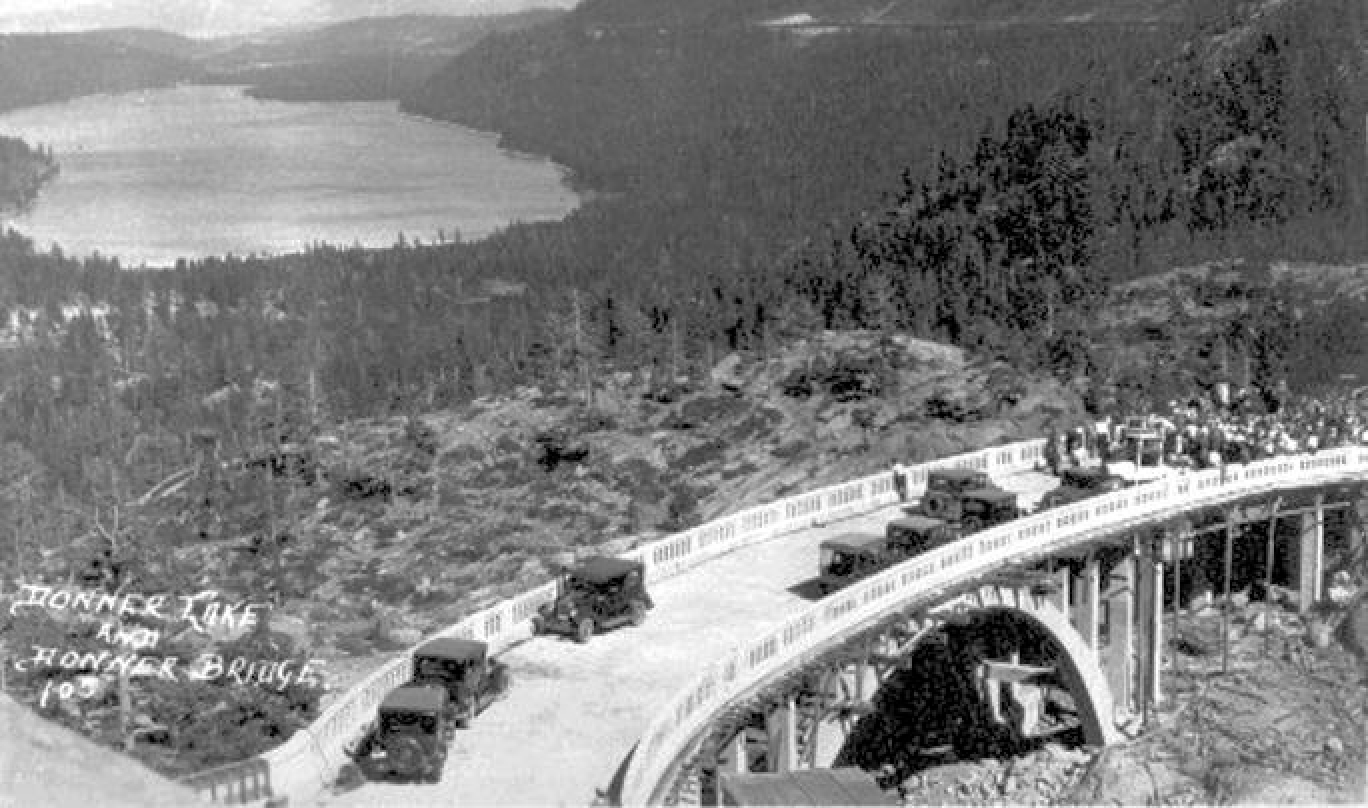 Below, another photo taken right before the ceremony. Notice the rail forms still attached to the left side entrance, and also the same forms laying down to the right of the storage container. Those rails on the left entrance are still there--they weren't replaced in 1995 like the rest of the bridge rails. The other rails were changed to have smaller openings--supposedly so very small kids couldn't fall through.

Below right, another photo from the ceremony. Notice the California flag and another flag on the other side. Notice the view bench is not completed and the approach fill is not quite full. And of course, no vista site, which was built 10 years later. 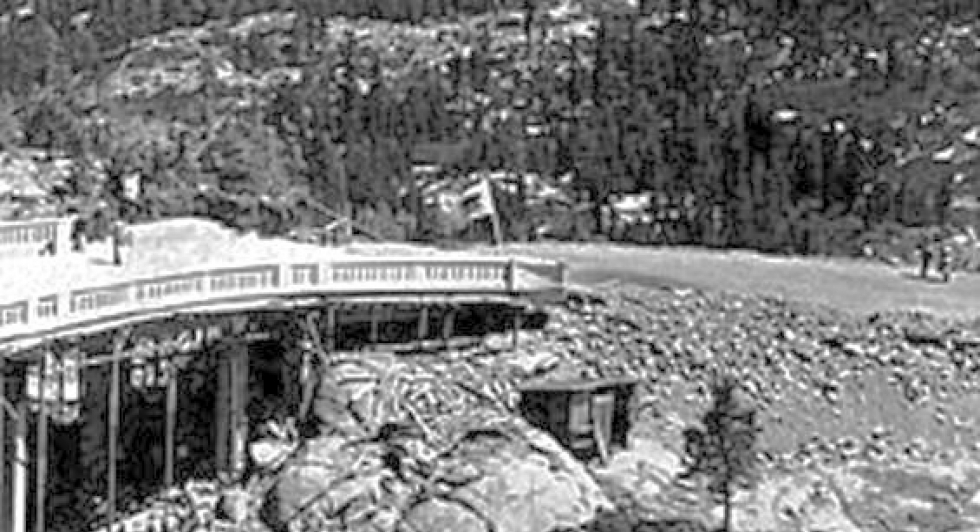 Here are some interesting facts about the construction of the famous "rainbow" bridge, thanks to rare original state documents provided to me by Jack Duncan, author of "To Donner Pass From the Pacific."

This bridge was the final segment of the new and re-aligned State Highway 37. It replaced the old Highway 37, which was also the Dutch Flat Donner Lake Wagon Road, built in 1864 by the railroad builders and taken over by the state in 1909. The state's plans for the new highway were completed in 1922...all those plans are labeled "Highway 37." No one knew of any "Highway 40" until a year after the bridge was completed, when the name of this new highway was changed to Highway 40, as part of the new interstate highway numbering system.

The bridge was designed by the California Department of Engineering's Bridge Department group in Sacramento, led by Harlan D. Miller. He came from New York State's Bridge Department. His design included the descending curve, which was a first in bridges, and the view bench. He died the year this bridge was completed. Details continue below the next five photos. 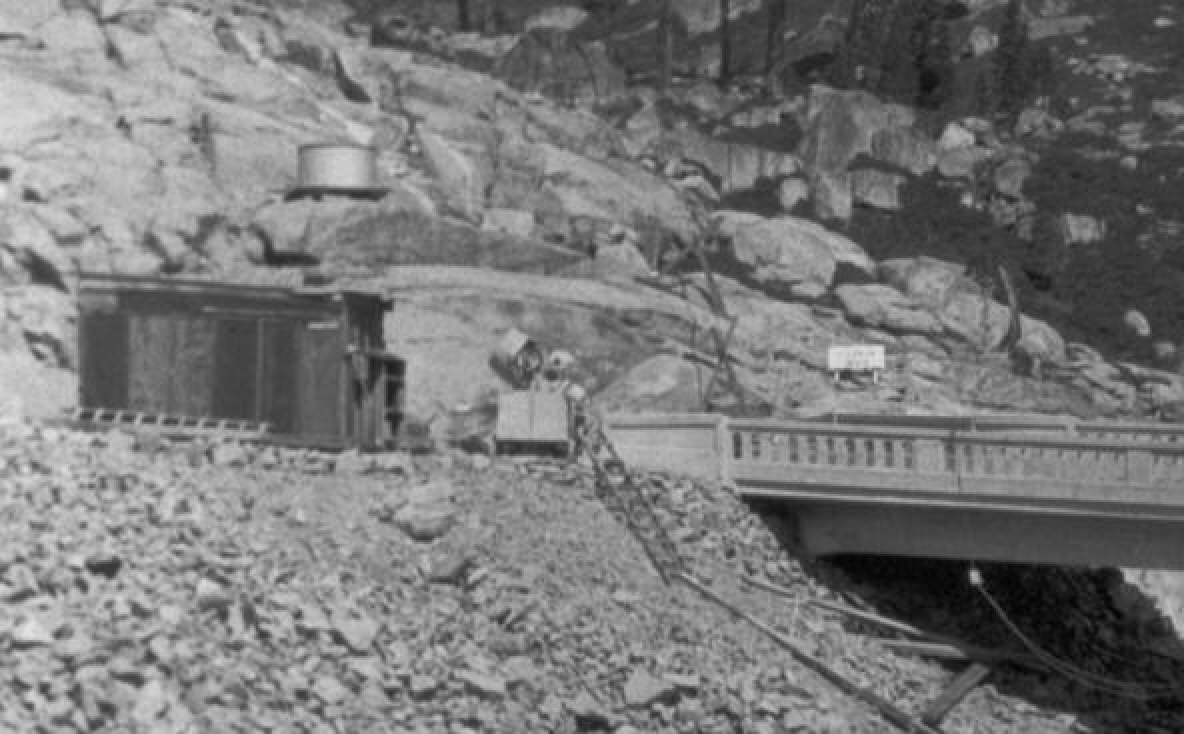 According to the old documents, the concrete mixer was set up on the westerly end of the bridge. Concrete was wheel-barrowed by hand down the slope

Left, a portion of a newly found photo showing the storage shed and the mixer (just as described, set up on the westerly end) and a water tank above it. After the tank was somehow filled, water could flow by gravity to the mixer when needed.

Below, the same mixer... 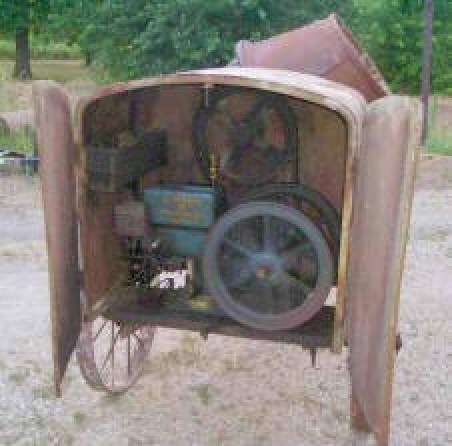 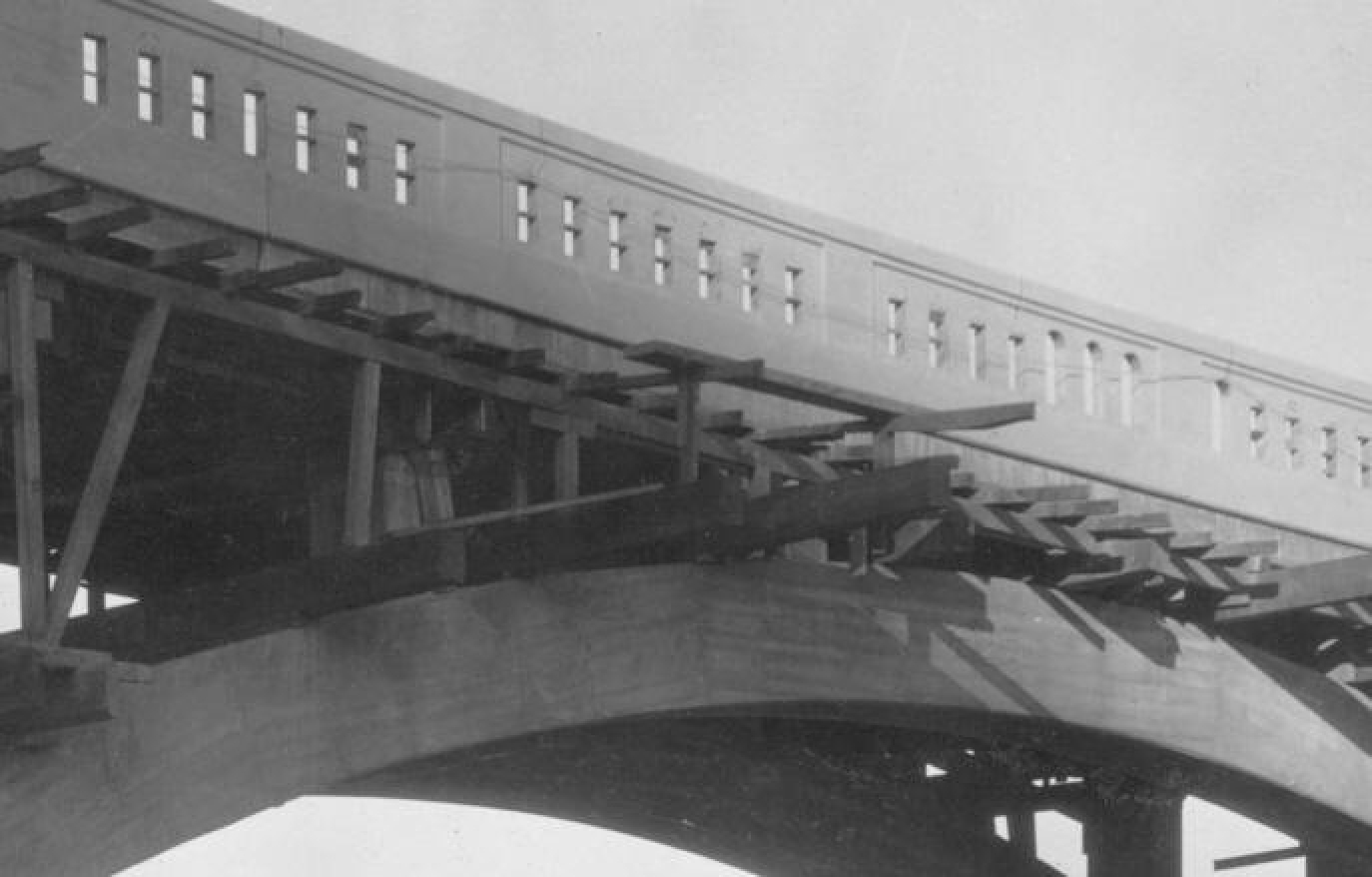 Excavation for the footings began on June 15, 1925 (didn't wait for the contract to be signed)

Hand drills were first used, then a compressor and jackhammer.

The first concrete was poured in the footings for the arch on July 11, 1925

Dedicated and opened for traffic on August 22, 1926

Final concrete was poured on September 7, 1926

All contract items were completed on October 25, 1926

One resident engineer for both years.

One resident inspector for 1926 only.

Gildersleeve's profit was less than $1500.

From the final report: "Difficult form work, due to unusual alignment, was responsible for some delay in the completion of the contract."

Approaches to the bridge were filled with rock material from the "railroad waste dump 1/2 mile distant" (between the 1914 incline and the older incline). That "railroad waste" was actually the blasted chunks of rocks from the summit tunnel and carted out of the tunnel and tossed over the cliff in 1865-67. After laying there for 60 years, the rock material was loaded into a hopper at the dump and hauled to the new bridge in the 5-ton truck, using the old state highway/DFDLWR. So every time we drive over the bridge approaches, we're driving on rocks carted out of the summit tunnel 145 years ago.

Other materials used were:

Sand and gravel from American River Sand & Gravel, Mayhew, Sacramento (not from Donner Lake as rumor had it)

Shipments of materials were made to a railroad siding one mile from the bridge site and were hauled over the newly constructed road (the railroad siding is currently the Donner Ski Ranch overflow parking lot).

Water was obtained from several small lakes in the vicinity of the site (ponds still there, but no mention of how the water got to the bridge site).

The bridge doesn't go over any waterway...only a granite ravine. In fact, at one point, there was talk of just filling in the ravine instead of having a bridge. 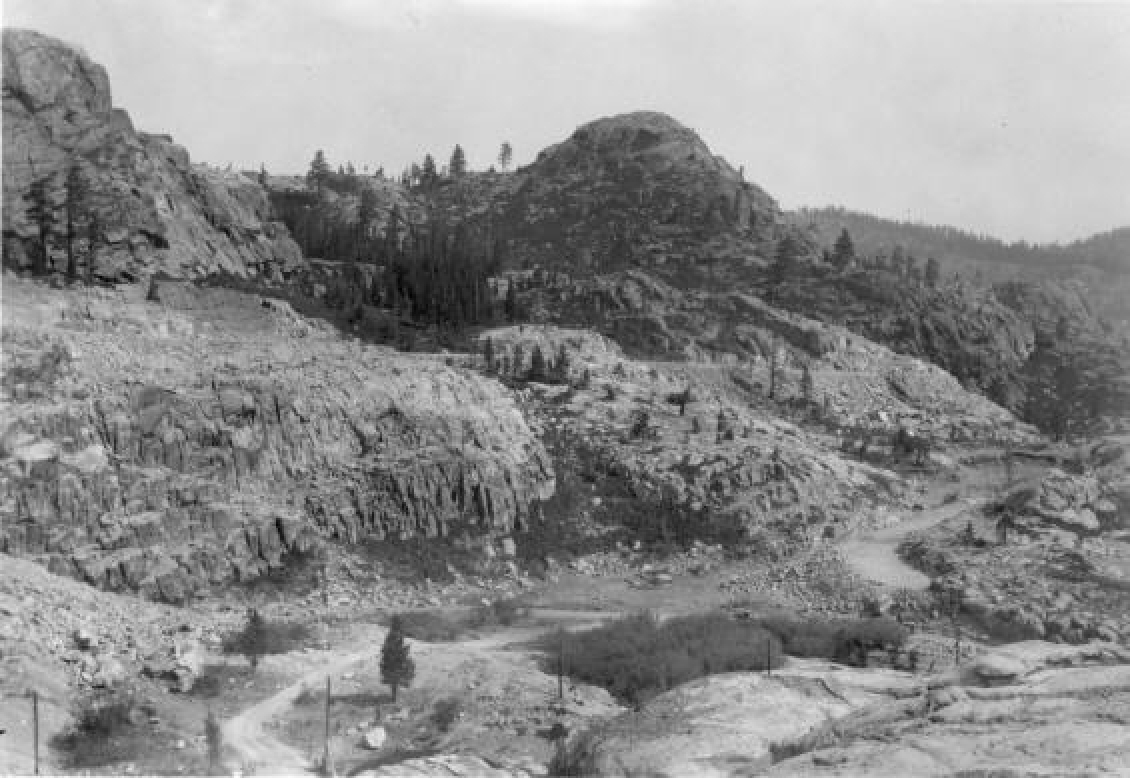 Before the bridge and during the fill, above and closeup below. Notice the two cars on the old road (one in each direction)...that old road was soon shifted towards the camera since the supporting fill for new road was about to cover the old road. 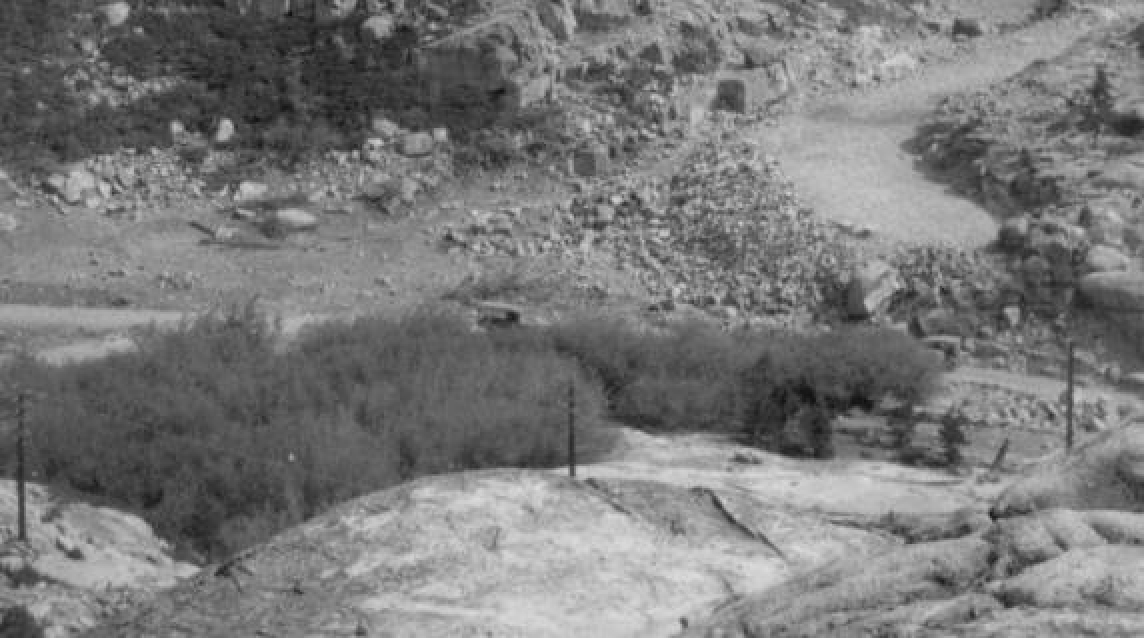 Above, only a part of the new road is open, but not the bridge at left.

Cars are transitioning onto the new portion from the old road (right corner). Actually, this part of the old road had recently been shifted about 50 feet to the west...the original is buried under the support fill.

The actual plans for this section of Highway 40 (then called Highway 37) will be posted here soon.

Below, 1928 Auburn Blvd in Citrus Heights at Greenback Lane. 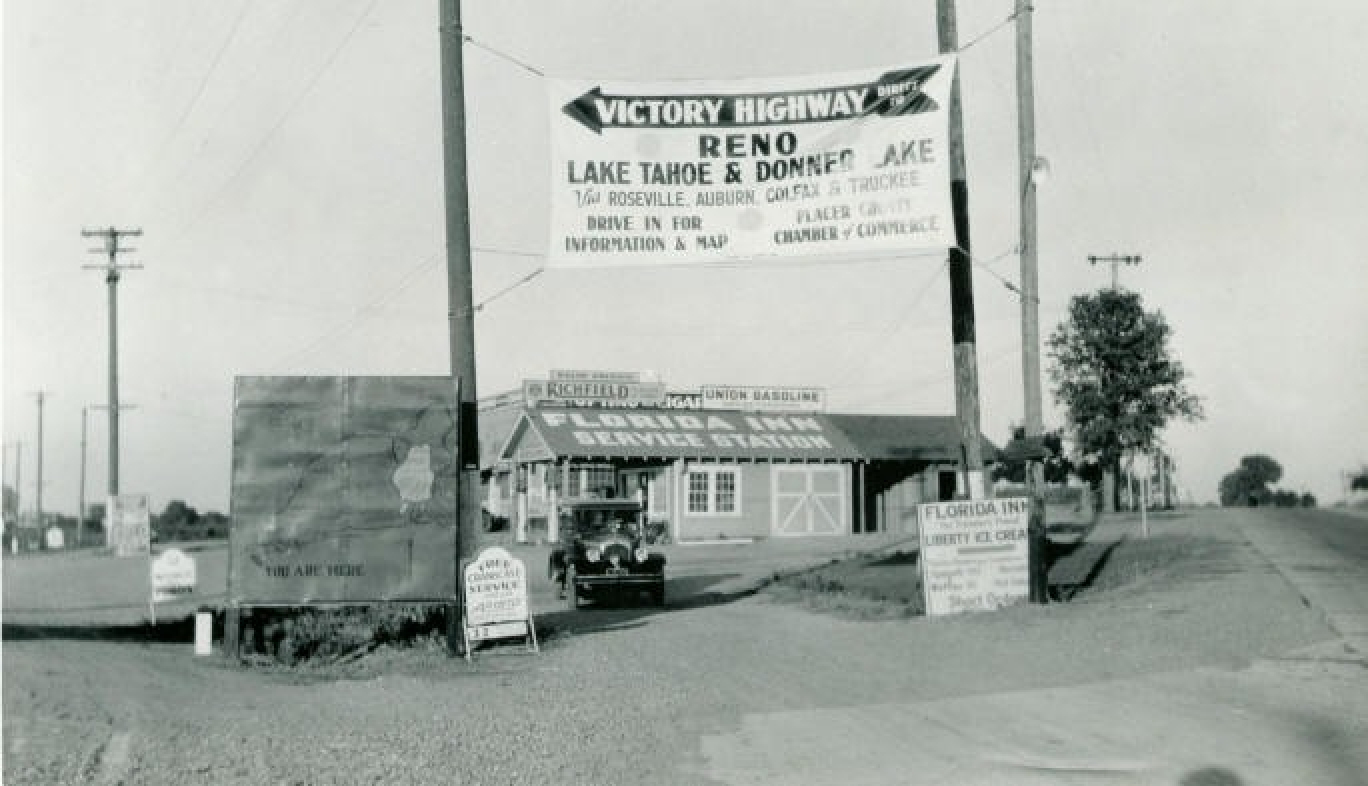 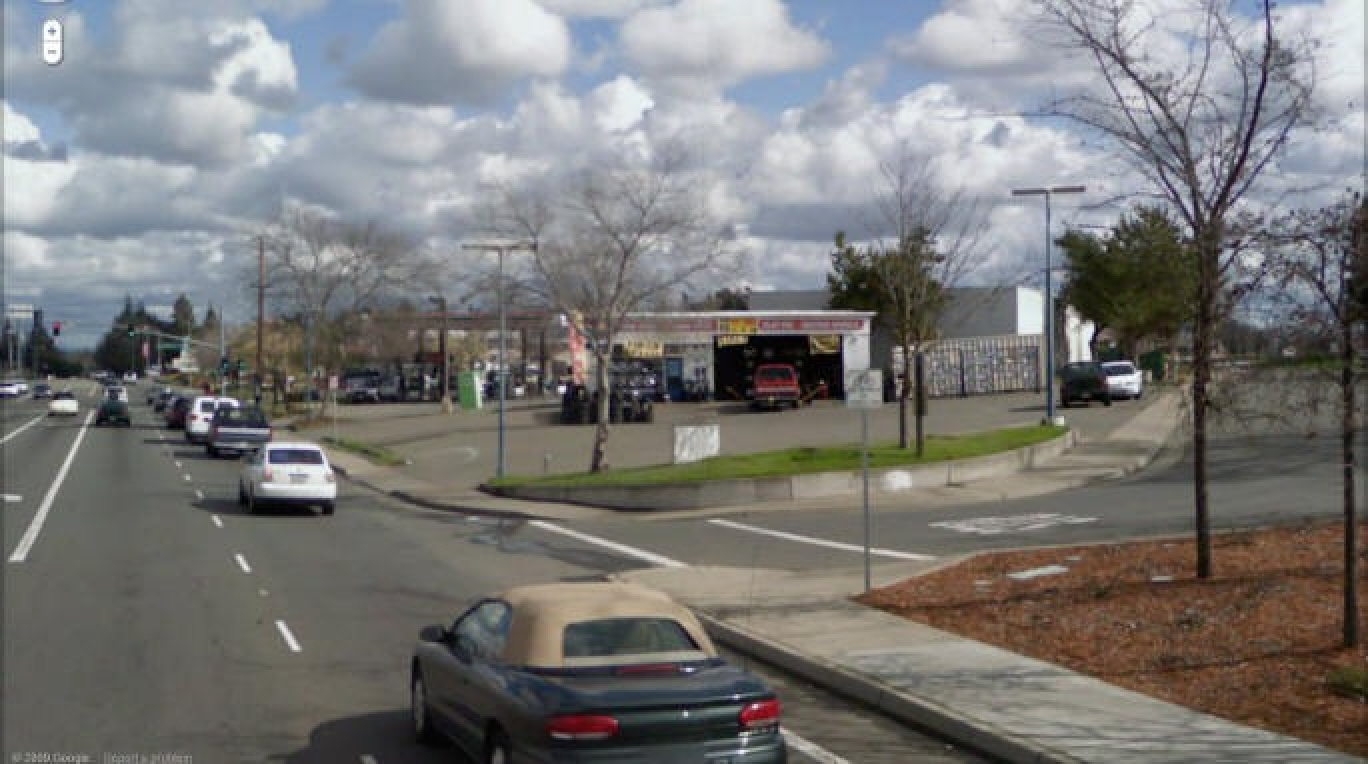