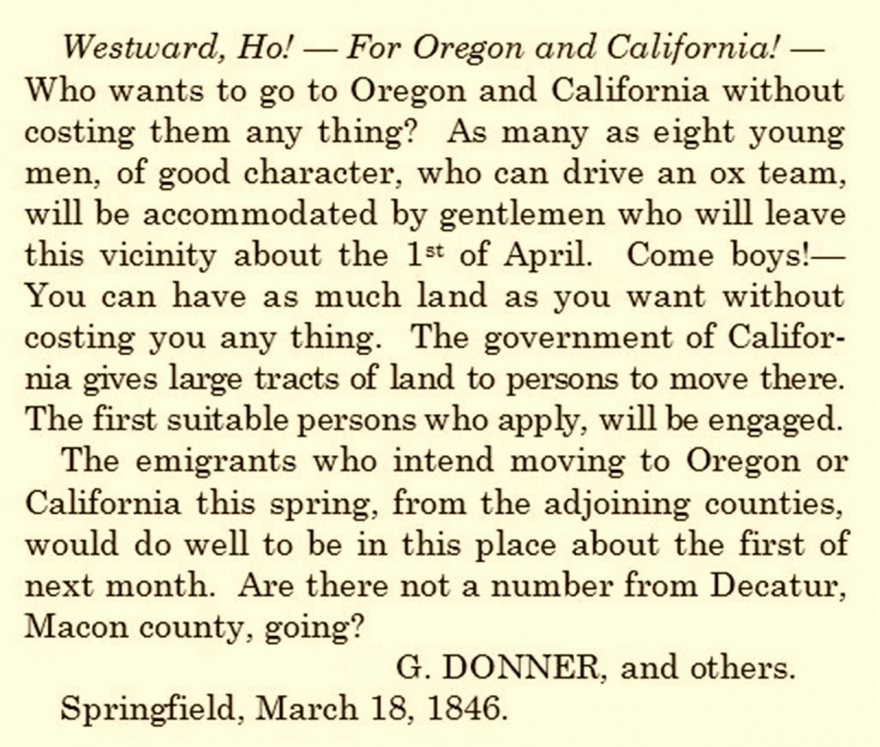 An exact reproduction of the ad that George Donner placed

This road from Donner Lake to and over the summit was first an Indian route (petroglyphs can be seen alongside the road near the summit), then used by a few early pioneers including the 1844 Stephens-Murphy-Townsend Party and then the Donner Party. Snow forced members of the Donner Partym to turn around at a point between the lake and the summit although the survivors left for Sacramento using this route.

Below, Westward The Course Of Empire, 1862 painting by Emanuel Leutze.

The second wagon says "California" on the side.

This actual painting is 30 feet wide and is in the US Capitol.

Notes about this painting at bottom of this page 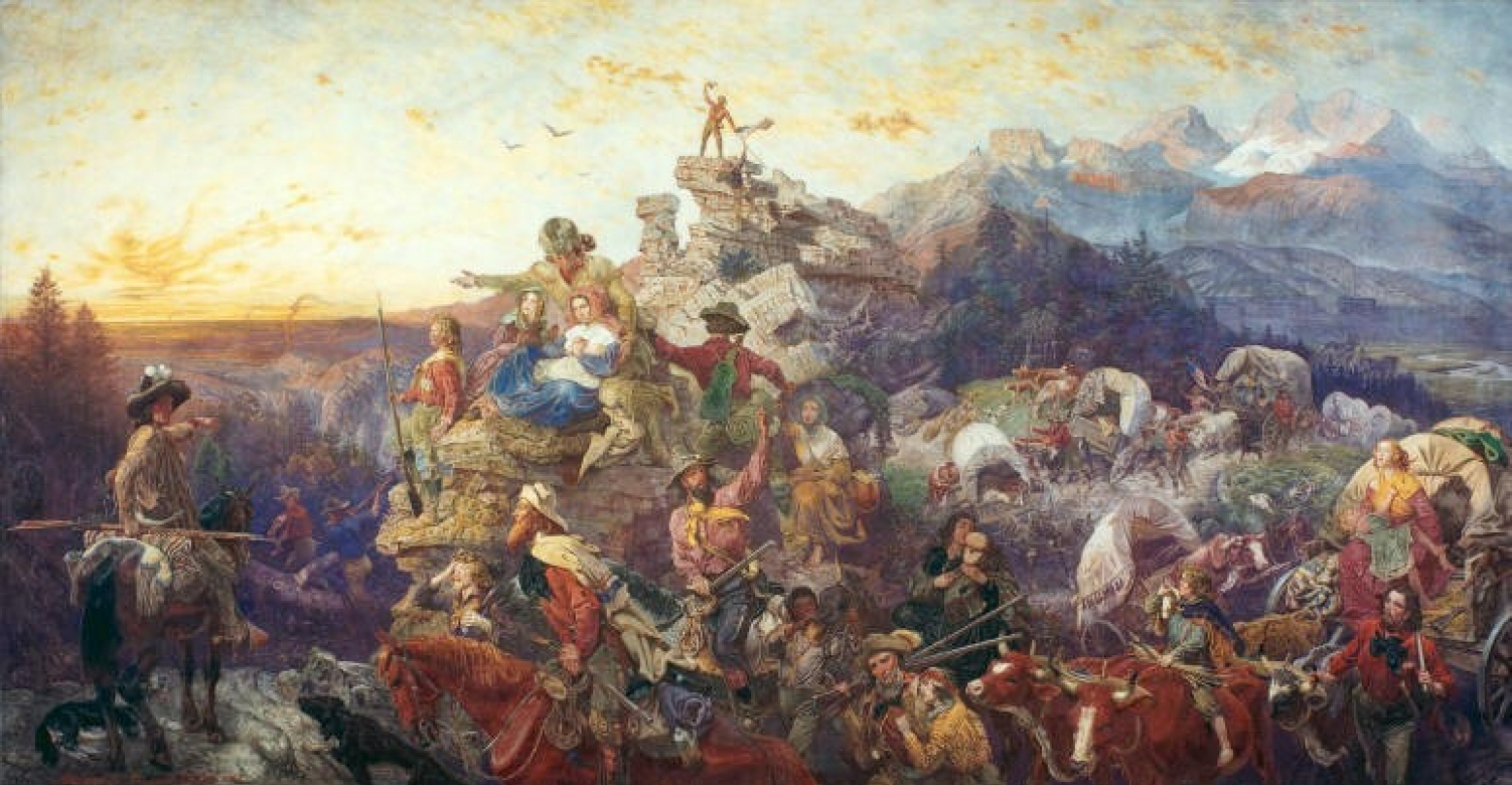 In 1861, the construction of the transcontintental railroad was beginning. The Central Pacific Railroad's chief engineer Theodore Judah had determined the Truckee route would be the way to go. They first needed a road to move their material and men along the route, so they spent what would today be $6 million dollars to build a modern road from Dutch Flat to Donner Lake, mostly on the path of the original trail. You can see several photos of this road after it was improved in 1864-66 in the 1800s Photos section. Once this well-engineered road was completed, it became the main pioneer route for non-train travelers and this "Truckee Route" has since become the main east-west interstate highway route.

The old road next became famous as part of the first transcontinental highway in 1913...the Lincoln Highway, and part of the Victory Highway. Beginning in 1910, it was an official California state highway, numbered Highway 37. The road was never paved, always a gravel road, as were most highways until the 1930s, which has caused it to become eroded and overgrown with brush and trees along certain sections.

In 1922, the state of California decided a better road was needed that would allow cars to go faster and safer. Fortunately, in this 6-mile area, their plans were for a new road that was very close to but didn't destroy the original road. The new road was completed in 1926 and was soon designated Highway 40. It included the now famous Donner Summit Bridge. After 1926, Caltrans maintained the replaced original old state highway for public use and in fact, USGS maps continued to label (and still do) the old road to the summit as “Jeep Trail” or “Emigrant Trail”.

In 1956, the right-of-way of this original California highway from Donner Lake to beyond the summit was "relinquished" by Caltrans to Nevada and Placer Counties with Caltrans retaining ultimate control of the road. The road was openly used by the public for recreation and access from 1926 until 1989, when a portion of the land over which the highway passes was blocked by new owners of the surrounding land who purchased several hundred acres from the Southern Pacific Development Company in 1987. This website began in 2005 as a vehicle to end this illegal blockade by pressuring politicians of Nevada County and Truckee. Unbelievably, those politicians ferociosly fought us for years, but in 2011, after help from Caltrans, we won. The public can now again freely use their old road and, as a bonus, 300 acres around it which is now California state park land.

You'll find much more detailed history of the old road in the Hiking section. 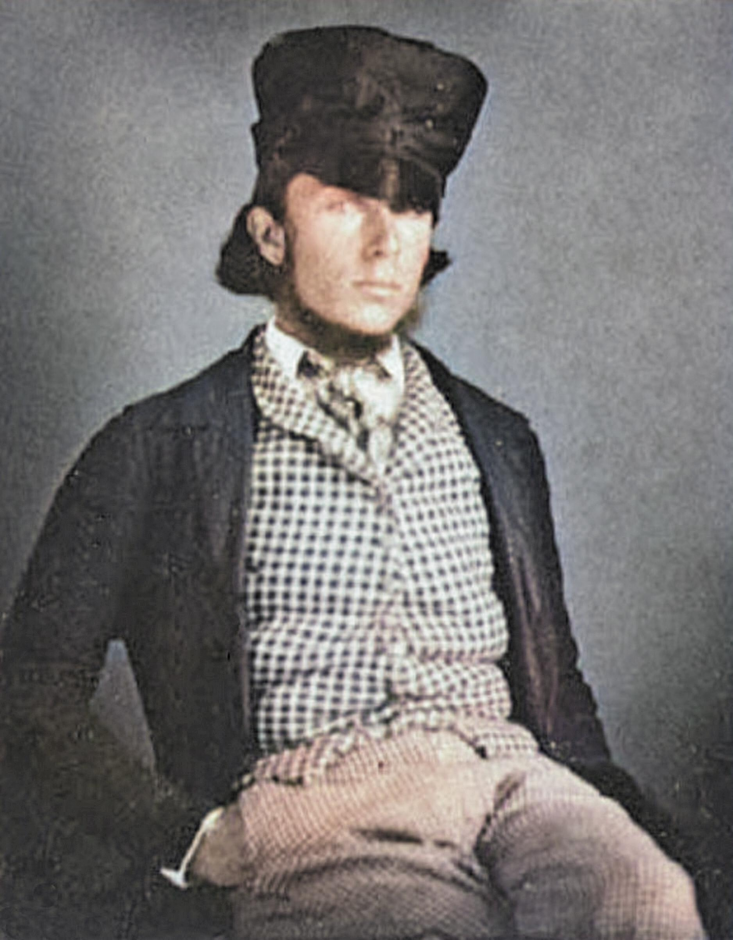 Theodore Judah, born in 1826 in Bridgeport, Connecticut, was the founder of the transcontinental railroad. He was an engineer "obsessed" with building a transcontinental railroad. While in his 20s and working as chief engineer for Sacramento railroads in the late 1850s and early 1860s,  he made several trips via Panama Canal to Washington DC to lobby for his "crazy" plan...with little result. He was able to obtain some support from San Francisco investors but they soon backed out, so he hit up Sacramento investors. He found several willing merchants, including four who would become famous and wealthy...Leland Stanford, Charles Crocker, Mark Hopkins, and Collis Huntington. Their new company was the Central Pacific Railroad and they began pushing for additional financing from the federal government.

From late summer of 1860 to late summer of 1861, Judah surveyed the basically unmapped Sierra Mountains on horseback for the best route for the transcontinental railroad, with help from Dr. Daniel Strong of Dutch Flat who pushed for the Donner Pass route. Judah produced a 17,000-word report in October 1861 detailing his reasons for choosing the Truckee Route over the South Tahoe route. An amazing amount of work. Read it here. Congress and President Lincoln approved funding in 1862, in the middle of the Civil War. Judah soon had disputes with the other four partners and was in the process of buying them out when he died at age 37 of "Panama fever," just two months after construction began.

Judah was one of the great builders of America...he is honored by a statue in Old Sacramento, a monument in Folsom, streets in San Francisco, Sacramento, and Roseville, schools in California, a mountain near Donner Pass, and a ski lift at Sugar Bowl. And of course, the transcontinental railroad.

Lewis Clement was the Central Pacific Railroad engineer in direct charge of the final location, design, and construction of the section between Colfax and Truckee, including the Sierra tunnels and snowsheds. Many who look at the old tunnels today wonder how the builders figured out where to carve into the rock so that both ends met up in the same spot--and at the summit tunnel, it wasn't just two ends, but four, with workers working outward from the center shaft. Well, it was Clement's engineering:

"The...crews worked round the clock... Then, at 1am on May 3, 1867, a great, noisy crumbling took place at the east facing, and light from torches in the west could be seen flickering through the dust. ... The Summit had been pierced. The Sierras had been bested. ...a week after the breakthrough, young Lewis Clement, the engineer in charge of Summit Tunnel, strode into the now widened bore, surveyor's instruments in hand. With torchbearers stationed every few yards in the 1,659-foot bore, Clement began his first series of observations in the damp and eerie tunnel. During the preceding two years' work he and his assistants, including Samuel Montague and Russell Guppy, had been measuring under conditions never taught about in engineering schools. They had made their calculations under poor visibility on a wildly uneven tunnel floor, plotting a bore not only divided into four distinct parts, but one that had to gradually rise, descend, and curve as it penetrated from west to east. ... the expected margin of error was large, and if the various bores were seriously misaligned, many months of expensive remedial work would have to be done, delaying the Central Pacific Railroad's progress east. ... As Clement finished his measurements and worked out the geometric statistics at a rude desk near the tunnel mouth, he found his prayers answered. Summit Tunnel's four bores fitted together almost perfectly, with a total error in true line of less than two inches. The seemingly impossible had been achieved. The longest tunnel anyone had cut through natural granite, cut at a daunting altitude in an abominable climate, had been bored by a small army of Chinese thousands of miles from their ancestral home. The Sierras were truly breached and ... the great race across the continent was on. ... " —John Hoyt Williams, A Great And Shining Road

Notes about the painting above... The spot where the pioneers would be this excited to finally reach a summit and (artistically) view "the Pacific slope" would likely be the first Donner Summit on the original trail/road. However, only the right 3/4 of the painting is somewhat geography accurate. The valley to the left is supposed to represent the Sacramento Valley, but in reality, the only valley visible from Donner Summit (after climbing granite 50 feet higher than the road itself) is the nearby Van Norden (Summit) Valley...with many hills to descend before seeing a view of the Sacramento Valley with the Pacific Ocean as shown in the painting. Actually, in 1862, the date of this painting, most pioneers traveling north of Lake Tahoe came over Roller Pass near the original summit of Donner Pass, but that route doesn't have a view resembling the painting. In fact, no summit of any route into California provides a view of the Sacramento Valley due to trees and geography. In 1862, the majority of pioneers came to California via South Lake Tahoe and the (Kit) Carson Pass, slightly easier than the route north of Lake Tahoe. However, the summit at the Carson Pass does not resembles anything like the painting.